Let us now look at a few competitive strengths and strategies of Paradeep Phosphates Limited...

+ Well-Positioned to Capture Favorable Indian Fertilizer Industry Dynamics Supported by Conducive Government Regulations: Due to certain factors such as increase in crop intensity, increase in per capita food consumption and dietary changes, per capita rise in income and ease of credit availability and high subsidy support from the government, the company expects to continue witnessing growth in the Indian fertilizer industry. The demand for fertilizers in India is expected to reach approximately 66 million tonnes by Financial Year 2026 growing at a CAGR of 2.9%-3.1% from Financial Year 2022 to Financial Year 2026. Further, the company expects to benefit from the government policies that support the fertilizer industry. Over the next five years, DAP and NPK is expected to lead the growth of the Phosphatic fertilizers segment along with complex fertilizers as India’s production of crops such as fruits and vegetables, sugarcane and cotton witness a higher growth compared to the past. (Source: CRISIL Report) The company believes it is well positioned to capture a significant share of this growth due to (i) its sizeable and certified manufacturing facility and infrastructure; (ii) backward integration of its manufacturing process that typically allows it to have reliable supply of raw materials and cost advantages, and thus production flexibility, over other fertilizer manufacturers that are not backward integrated; and (iii) the company’s established sales and distribution network which will be enhanced by the addition of the sales and distribution network associated with the Goa Facility.

+ Driving Raw Material Efficiency Through Backward Integration of Facilities and Effective Sourcing : The company is committed to the integration of the industrial value chain from securing a stable supply of raw materials and owning integrated facilities to maintaining a wide distribution network for its products and ensuring good customer service. The primary raw materials include Phosphate Rock, Phosphoric acid, Ammonia, Sulphur and MOP. The company produces some of Phosphoric acid and Sulphuric acid requirements, with the other raw materials being sourced from suppliers. The company sources the raw materials from a number of suppliers based locally and in countries such as Morocco, Jordan, Qatar and Saudi Arabia, among others. In the nine months ended December 31, 2021 and the Financial Year 2021, the company procured raw materials totaling to approximately Rs 49,170.90 million and Rs 34,485.77 million, respectively, from approximately six suppliers and all of them have been supplying raw materials to the company for more than 10 years. The company believes it has a strong relationships with suppliers for the company’s raw material requirements.

+ Strategic Location of its Manufacturing Facility and Sizeable Material Storage, Handling and Port Facilities : The company’s manufacturing facility is strategically located near the Paradeep port, where the company owns a captive berth with 14 meters draft with facilities to unload solid and liquid cargo. As a result, the company is generally able to meet loading and unloading schedules of the carriers and save on demurrage charges. The company proposes to replace its ship unloader by procuring a new one by December 2022 to enhance reliability and efficiency of its port operations. It also has a closed conveyor belt which is 3.4 km long connecting the Paradeep port to its facility. This enables the company to transport the raw materials in solid form directly to its facility. In addition, the company has a cross-country pipeline which is 3.1 km long which enables it to transport raw material in liquid form directly to its facility. The company also owns a railway siding. Paradeep Phosphates have capacity to store up to 120,000 MT, 65,000 MT, 55,000 MT and 35,000 MT of Phosphate Rock, Phosphoric acid, Sulphur and MOP, respectively. The company also has an Ammonia storage facility of approximately 40,000 MT. The ability to store raw materials at the company’s facility enables it to withstand disruptions in supply as well as volatility in the price of raw materials for a short duration.

Here are a few strategies Paradeep Phosphates Limited has for its business:

Improve market leadership through investment in brand building and other campaigns

And finally here’s a look at key financials of Paradeep Phosphates Limited... 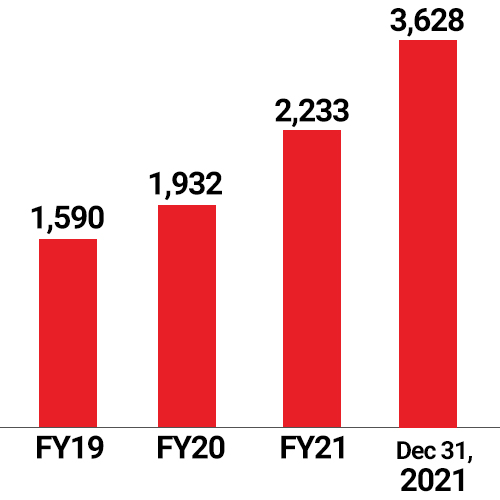 How to apply for an 足球电子竞技联赛 ?

How to apply for 足球电子竞技联赛 through ASBA

How to apply for an 足球电子竞技联赛 using UPI

Allotment dates are yet to be decided

Link Intime India Private Limited is the registrar for this 足球电子竞技联赛

The dates are yet to be decided.

You can read more about Paradeep Phosphates Limited and its 足球电子竞技联赛 from the company’s red herring prospectus (RHP) here .